Becoming an apprentice is a valuable move in a young persons’ career, allowing you to learn from industry experts alongside formal education. But knowing how to make the most of your apprenticeship, and squeezing everything you can from the opportunity is what makes the real difference.

As most apprentices are new to the working world, they may not know all the tricks for getting ahead in their career. Following these tips will help you make a mark on the company you’re learning with, and succeed in your industry.

How to Make the Most of Your Apprenticeship

Apprenticeships allow you to learn directly from skilled workers with decades of experience and industry expertise.

Throughout your apprenticeship, actively listen to your colleagues, ask questions every day and learn how they do things.

The senior team at Hythe Group fully recognises the importance of training the next generation of workers.

2. Accept and Go After Every Available Opportunity

As well as your apprenticeship qualifications, there will most likely be other certifications you can go after. This could be driving lessons, a new skill within your own trade, or a qualification for a separate trade.

Saying yes to every available opportunity will ensure you complete your apprenticeship with well-rounded knowledge, and the documentation to go with it.

“We strive to make an apprenticeship unique within the group of companies. We have numerous trades and believe that an apprentice should spend time across all skill sets. By the end of an apprenticeship, each student should have a primary and secondary trade with the ability, if required, to touch on other skill sets to ensure the business can keep the teams dynamic. We believe in keeping the workforce engaged and constantly developing. Carrying out an apprenticeship within Hythe Group turns the students into invaluable members of the business and extremely employable to the industry if they choose to move on.”

Stepping into an unfamiliar environment where you’re starting from scratch is daunting.

As an apprentice, people aren’t expecting you to go into the job knowing exactly what to do. Many of the workers started as apprentices themselves, so they’re fully aware things can get confusing, and tiring, and apprentices will make mistakes.

Remember that things can and will go wrong. What shows real determination is maintaining a positive attitude in the face of adversity.

Being confident, polite and friendly to your colleagues shows that you’re there to learn and you’ll quickly become a crucial part of the team.

4. Be Proactive About Your Mistakes

When something goes wrong, proactively resolve the issue and find out what caused it.

Failing should be a positive experience, you need to make mistakes, learn rejection, learn from re-work and difficult situations. It’s not just about a skill; it’s about interaction, communication and behaviour.

On your learning journey, it’s completely expected that you’ll make mistakes. Admitting when you’ve gone wrong and learning how to fix the problem for the next time is one of the best ways to learn.

And if you’re not sure why the problem occurred, ask a senior employee the following questions:

How to Find an Apprenticeship?

Can You Get an Apprenticeship With No Experience?

That’s a wrap on our tips for How to Make the Most of Your Apprenticeship!

Henry Barker was one of the first apprentices hired by Hythe Group’s original company, Hythe Marine Services. Alongside Rhys Smallman, Henry joined the team as an Apprentice Pipefitter and Welder in September 2012 just after finishing school. 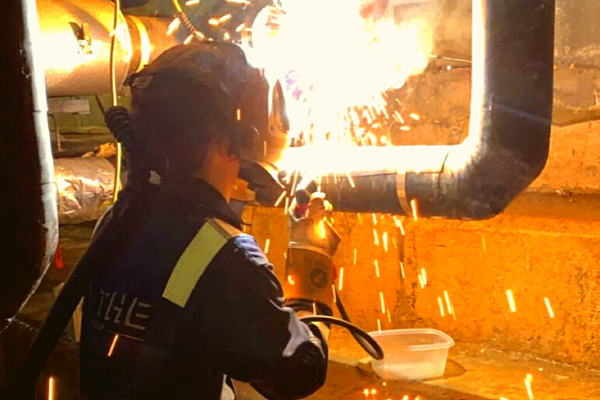 After completing his apprenticeship, Henry became full time with Hythe Marine Services, until his recent move to Hythe Building Services.

We spoke to Henry to find out about his career, company changes and the importance of personal growth.

Although Henry’s apprenticeship with Hythe Marine Services started in September 2012, this wasn’t the official beginning of his career. Henry explained, “Luke Fitzgerald (Director of Operations) used to bring me into the HMS workshop on Saturday mornings so I could gain experience. This opportunity led to an offer for an apprenticeship position once I finished school.”

Henry’s Pipefitters Apprenticeship lasted for four years. During the first year, Henry completed his Level 2 NVQ at PETA, an engineering college, before spending six months onsite with Hythe Marine Services. Over the final three years, while Henry was completing his Level 3 NVQ, a PETA assessor would visit monthly to determine his progress.

Throughout this time, Henry was also working toward his Level 3 City and Guilds qualification at Southampton City College.

Henry told us, “I completed my apprenticeship in the summer of 2016. Since then, I have worked on numerous projects for HMS. Most notably in Portsmouth dockyard but I’ve also worked at Southampton General Hospital, Whitman’s Laboratories and in Italy for two weeks working on a superyacht.”

Changing Sectors: From the Marine Industry to Building Services

Since his move in 2019, Henry has worked on various projects at different sites across the south coast, and in HBS’ fabrication workshop.

When asked why he decided to move companies, Henry said, “After working mostly in Portsmouth dockyard for seven years, I wanted to experience a new challenge and see what the outside world was about. Luckily for me, that opportunity was there for me at HBS, who were happy to take me on.”

Henry will be using the welding and pipefitting skills learned during his time with Hythe Marine Services, as they are still a fundamental part of his role. However, this career move also offers the opportunity to learn new skills.

“The thing I look forward to most about working with Hythe Building Services is the opportunity to be working at different places. Although some of our projects are fairly long, it’s nice to get out and about on the different sites. I enjoy seeing where all the pipework actually goes and how all the different systems are put together.”

Although the companies are separate entities, it’s important for them to have strong cross-sector relationships. When employees move across companies, it forms a new link between each team. These connections are crucial for the strength of Hythe Group as a whole.

Similarly, the experienced generation passes down their knowledge and skill to the younger employees and apprentices. Without this, decades of expertise would be lost.

Henry is a prime example of the value in educating young people in trades. Henry had the opportunity to go to college to learn his trade, whilst working on jobs alongside experienced workers. This involved a lot of hard work on Henry’s behalf to get to where he is today. However, he also recognises the role his fellow team members had in his success.

If you’re interested in finding out more about apprenticeships with Hythe Marine Services, take a look at the following articles:

How has Hythe Marine Services Evolved over the years?

We asked Henry whether the company has changed over his career. He told us, “HMS has evolved massively since I first joined the company. It was a relatively small company back when I first started, and over the years it’s grown a lot, with the open projects seemingly increasing every year. The company has welcomed many new faces since I’ve been there, and each one of them has helped to push the company in the direction it’s at today.”

Henry also mentioned that he believes Hythe Group is different from a lot of other companies because of the diverse amount of work the group of companies undertakes, and the endless opportunities available to people. He explained that there are always new things to be learned, and new experiences available somewhere within the company.

Read more about the History of Hythe Group.

Interested in working with the Hythe Group team or enquiring about our services? Get in touch today.

Hythe Building Services designed and delivered the Mechanical services for this prestigious project with Kier Construction for Portsmouth University.

The Hythe Building Services team stripped out all existing Domestic, Heating, Ventilation and Air Conditioning Services and installed a completely new system that included new wash hand basins within the new Consultant rooms, a VAV system complete with heating coils to control the optimum environment within the teaching spaces, intricate BMS modifications to incorporate the new systems onto the existing BMS Schnieder infrastructure.

The project was a great success and Hythe went on to secure and deliver two other extremely time sensitive projects with Kier for The University of Portsmouth, our relationship with Kier and the University continues to flourish.